HOLDENVILLE, Oklahoma – Hughes County Sheriff’s Office has released a letter stating the organization will “no longer be honoring” their cross-deputization agreements with the Muscogee (Creek) Nation Lighthorse Police.

Maxwell stated in her letter the tribe has been reluctant in their assistance with tribal calls in Hughes County along with the lack of prosecution of cases and lack of resources.

According to Maxwell’s letter, the agency’s budget has been slashed causing the inability to accommodate MCN’s requirements regarding calls for service.

The requirement of the deputies included responding to calls, making arrests, providing paperwork for tribal court, tribal citizenship documentation and transportation of perpetrator; all of which Maxwell claims to be an illogical process for her staff under the set forth agreements.

The “lack of prosecution” Maxwell mentioned is the reason why suspects do little or no jail time causing frustration among the Hughes County citizens and crime victims.

Maxwell provided in her statement examples of injustice in her county.

“The thought that the tribal court can let the rape of a native child sit on a prosecutor’s/investigator’s desk for months without any action is infuriating to me.” she wrote. “The fact that an elderly native man can be beat to near death and the native suspect be released within days without prosecution is against everything in me.”

According to MCN Press Secretary Jason Salsman, the Nation was not aware of the Hughes County Sheriff’s allegations until he was contacted by an OKC-based reporter.

Salsman provided Mvskoke Media with his email response to the reporter dated Feb. 9 at 10:49 AM.

“Thank you for notifying us of this letter and Sheriff Maxwell’s complaints,” Salsman wrote. “I’ve checked with the Lighthorse Police, our Attorney General’s Office and Muscogee (Creek) Nation leadership and this is the first anyone has heard of this letter of the issues she’s outline.”

He stated the Nation would be reviewing the letter’s serious allegations.

MCN Attorney General’s Office contacted Sheriff Maxwell upon receiving the news from the reporter with no response from the sheriff, Salsman stated.

In his email, Salsman claimed the miscommunication about the agreements could have been clarified had Maxwell contacted the AG’s office.

“With these agreements in place the Lighthorse officers don’t need to respond when the Sheriff’s officers are present, and likewise the Sheriff does not need her officers to present in most cases to prosecute MCN cases,” he said in his response.

Salsman claimed the letter had numerous issues and misinformation. He further went on to explain had Maxwell contacted the Nation and provided defendant information, the AG could have provided her with resolutions to each case.

In her letter, the Sheriff does not clarify whether the suspects are tribal members or not, which would determine their jurisdictional court.

According to Salsman, by dropping the cross-deputization agreement, the County has now relinquished the agency’s ability to have any jurisdiction over Natives and has now created a great civil liability.

“The “good faith” exception normally available to cross-deputized law enforcement officers is gone,” he outlined in his emailed response. “Any evidence the Sheriff collects on a case where she doesn’t have jurisdiction may well be excluded from use as evidence in trial.

Maxwell claimed in her letter that her only mission is to protect and serve all citizens but her agency cannot do so post-McGirt.

She stated she believes the judicial system should revert back to pre-McGirt until the tribal courts and tribal law enforcement can better prepare for the overwhelming task.

According to Salsman, the Nation hopes to gain a better understanding of the motives and underlying issues of Sheriff Maxwell’s abrupt public announcement and her exit of participation from the cross-deputization agreement. 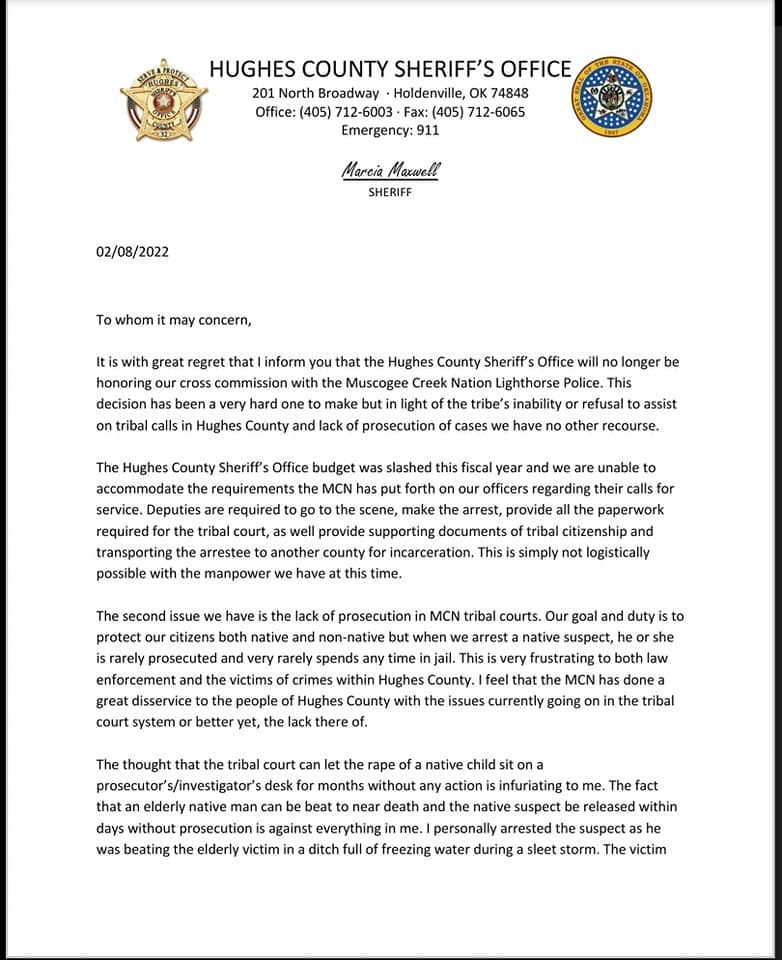 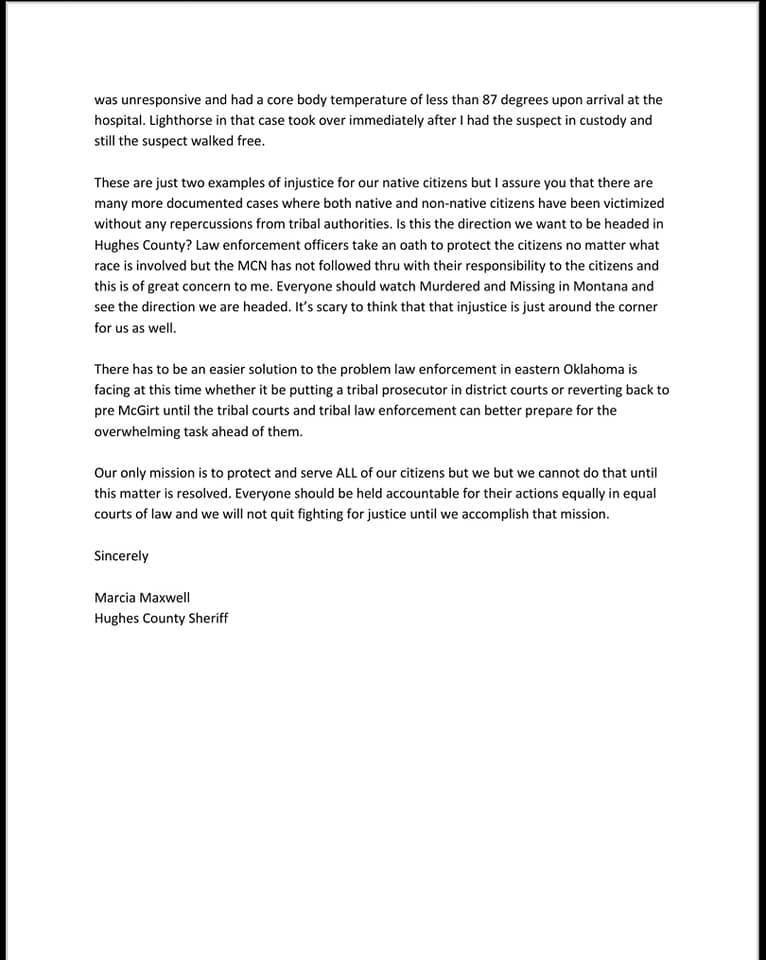 Morgan started her journalism career with Mvskoke Media at the beginning of the COVID-19 pandemic. Since then, her position has evolved to transforming stories in various forms across Mvskoke Media platforms as the Multimedia Producer.