Tucker Friend set the state in Oklahoma record for largest gourd, weighing in at 215 pounds. (Submission)

“This year, I’m going to really try at it and try to grow a world record,” – Tucker Friend

TAHLEQUAH, Oklahoma– It was on the first day of April when Muscogee (Creek) citizen Tucker Friend began growing his bushel gourd that would later on become the largest gourd ever in the state.

The 16-year-old from Tahlequah has always had a green thumb, according to his mother Heidi Wilder who said her son would get help from his grandpa when it came to gardening. She said her son has been interested in horticulture since he was 11 years old.

“He wanted a cell phone and I figured he wanted to talk to his friends or play games, and the first thing he did was look up giant pumpkins and how to grow them,” Wilder said.

He entered his first competition showing a pumpkin in 2018. 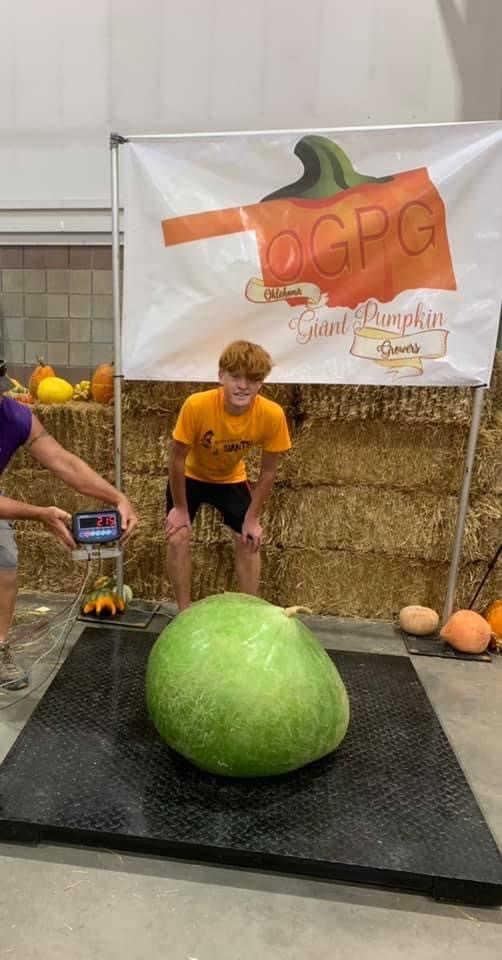 The competitions he entered, Friend found it was difficult to beat the state record with the pumpkins because it’s hard to grow them large in Oklahoma.

“Gourds are a little bit easier to grow and the state record number was a little smaller, so I decided to go after it,” Friend said. “The reason I wanted to grow them real big is because whoever gets first place they get bragging rights over.”

The last time the state record for the largest gourd grown was in 2020, but Friend beat it by nearly 100 pounds.

He took his gourd to the Oklahoma Giant Pumpkin Growers event in Claremore in September. Competing against other gourds, his outweighed the largest one by over 40 pounds. His gourd weighed in at 215 pounds.

Before he started growing gourds, Friend had been watching a Michigan man Mark Clementz who grew a gourd that weighed just over a ton in 2017.

His goal is to set the world record next year, Steve Connelly sets the current record at 470 pounds 8 ounces.

Liz Gray is the Managing Editor for Mvskoke Media. Her journalism career began as a reporter for Mvskoke News. She graduated from Northeastern State University and currently attends the University of Oklahoma Gaylord College as a graduate student.